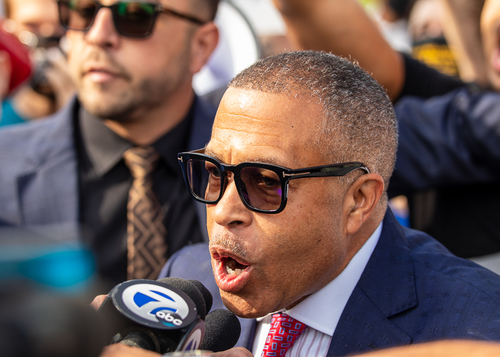 Detroit's former top cop has kept a longtime member of his security detail in his employ as he pivots to running for governor as a Republican.

James Craig's campaign paid out nearly $34,000 this election cycle to a Southfield security company run by Detroit Police Sgt. Mark Oliver, state filings indicate. Oliver served as part of Craig's protection unit while he was chief and is currently on leave from the department through May 2022.

Payments to Oliver's Shield Security Consultants and Protection Services are the second and third largest expenditures by the campaign, which has raised $1.5 million and spent more than $460,000. The payouts were first noted on Twitter by Detroit News reporter Craig Mauger.

The campaign declined to provide specifics about the work completed by Oliver's company. It issued Shield a payment for $15,000, on Sept. 14, when Craig was surrounded by demonstrators during a speech at Belle Isle. Another payment, for nealy $19,000, was issued Sept. 29, the day he sought ex-president Donald Trump's endorsement in Florida.

Oliver could not immediately be reached at numbers associated with him or his department email. A DPD spokesman said he was approved leave in May, while Craig was still chief.

Business filings show Oliver organized his company on May 21, about two weeks after Craig announced he'd step down from his role as Detroit police chief to mull a bid for governor.

He previously served as part of former Detroit Mayor Dave Bing's executive protection team and continued on in that role for part of Mayor Mike Duggan's first term, a mayoral spokesman said.