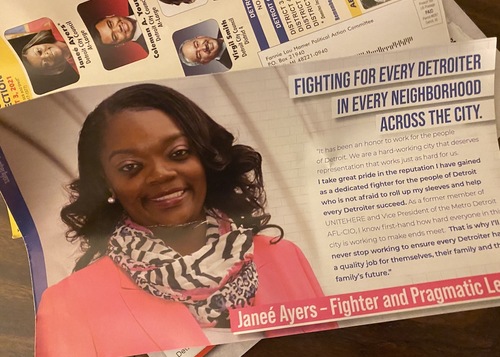 An August FBI raid on the home of Detroit city councilmember Janeé Ayers has slowed the pace of donations to her re-election campaign, but the cloud hasn't stopped a handful of top Duggan administration officials from giving to the longtime mayoral ally.

Ayers, the lone incumbent in the four-way at-large — or citywide — race, pulled in just $13,000 in contributions between the Aug. 3 primary and last week's campaign finance filing deadline, the least of four candidates running for two seats. The councilwoman of six years was previously the biggest fundraiser of the field by far.

Detroit Land Bank Authority director Saskia Thompson, who was appointed by a board that includes mayoral and City Council appointees, also gave, as did Duggan's Director of Customer Service, Adrian Tonon.

The officials' donations ranged from $21 to $207. None on the city side responded to requests for comment, while the Land Bank Authority's Thompson declined.

The donations to Ayers signal the officials "like to work with her and want to see her stay in," said political consultant Adolph Mongo. "Until they prove that she did something, you have to give her the benefit of the doubt."

Duggan did not instruct members of his administration to give, said his spokesman, John Roach. The mayor has declined to issue an endorsement in the race, but a dark money nonprofit run by his current and past appointees has spent heavily on Ayers' re-election effort, covering the city in billboards as the councilwoman herself avoids the public.

That's expected to change this week, however, when Ayers hosts her first constituent engagement event since the raid.

My next Coffee & Conversation on October 29th 11am at PVG Compound,(formally Gospel of Christ Ministries), 13920 Marlowe St, Detroit, Michigan 48227

Coffee Hours are perfect for sharing your thoughts and learn about upcoming legislation and programs. Hope to see you there! pic.twitter.com/9DEUUdxez1

Former state Sen. Coleman Young, Jr., who came a close second in the primary, pulled $74,000 in the same period that Ayers raised $13,000, while former state Rep. Mary Waters raised $27,000 and former Charter Commissioner Nicole Small raised nearly $15,000. Ayers' contributions since the primary represent less than half of what she raised in the three months before her last re-election bid in 2017.

Ahead of the raids, the former hospitality worker and union official had raised $158,000 from a broad coalition of PACs, unions, corporate and development industry executives, and individuals — more than twice as much as Young and 10 times as much as Waters and Small, who came in third and fourth place in the primary.

Polls have shown Ayers at risk of losing her seat to Waters, who was involved in a corruption case in 2010 and was earlier this month reported to owe $28,000 in property taxes. Ayers won 31 percent of the primary vote while Waters won 23.4 percent, but a Target-Insyght poll of 400 likely voters conducted almost two weeks ago had Ayers at 26 percent and Waters at 21 percent, within the 5 percent margin of error. Young led the survey with 34 percent and Small trailed with 7 percent.

Ayers' campaign did not immediately respond to a request for comment for this story.

The councilwoman has not discussed her involvement in the FBI corruption probe that took down Councilmember Andre Spivey for bribery. Councilmember Scott Benson, whose home and office were searched the same day as Ayers', has said he's done nothing wrong. He's opposed by seven write-in candidates.

Notable donors to each of the candidates in the at-large field include: